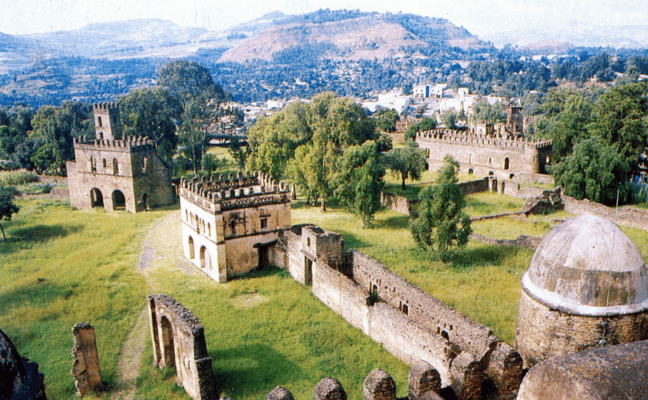 Gondar is a royal and ancient historical city perched at an altitude of 2200m above sea level, in northwestern Ethiopia.Between the 12th and 20th centuries, Gondar was home to many emperors. Today Gondar city has become a popular tourist destination. Enjoy exploring this northern city with the different things to do in Gondar which include visiting places such as:

The city  is well known as the place where the ancient, medieval castles in Ethiopia are located. Visiting Fasil Ghebbi should be the first of the many things to do in Gondar. Fasil Ghebbi is a UNESCO World Heritage Site that consists of the remains of a fortress city that was built by Emperor Fasilides.

Explore the splendid city of Fasil Ghebbi with its many medieval buildings and royal palaces. The most impressive of the castles is the two-storied palace of Emperor Fasilides, built with hewn brown basalt stones held together with mortar.

Another place you should visit while in the city is Fasilides Bath. Emperor Fasilides built a public bath to celebrate Timkat, the Epiphany in the Ethiopian Orthodox Church. The Fasilides Bath was also used as King Fasilides’s Bath. Today, this place serves as a baptismal point for many Orthodox Christians. Every year, crowds gather at Fasilides Bath for the Timkat celebration.

The city was the site of numerous fine churches, a number of which have survived to this day. While on tour in this great town, make a point to visit the finest of Gondar churches the Debre Birhan Selassie Church. This one of the most beautiful churches in Ethiopia. Its walls depict biblical scenes while the ceiling is covered with painted images of angel’s faces, including the life of Christ, Mary, the saints and the martyrs.

Lastly, finish off your tour in Gondar by taking a break from history and going on a guided excursion to Simien National Park, which contains some of the most dramatic scenery in Africa. During your safari adventure there is a high chance you will see the exotic Gelada baboons with their bright red hourglass chest markings.

As you plan on how to engage in the different things to do in Gondar, check into some of the best hotels Gondar city has to offer. Popular hotels in Gondar include Goha Hotel, Florida International Hotel and Taye Belay Hotel. All these hotels have modern facilities to ensure guests experience a comfortable stay.