Over twenty Mountain Gorilla in Rwanda families, totaling approximately 280 individual gorillas, live on the slopes of the Virunga Volcanoes in Rwanda’s Volcanoes National Park. Twelve of these twenty families are visited, with ten families visited each day. On a daily basis, the Parks Authority rotates the families you come to see. Seeing gorillas in the wild is a once-in-a-lifetime wildlife experience for many people.

Meeting the Gorillas in Rwanda  take place in the morning and begin around 07:30am from the Park Headquarters. Prior to departure, park staff will give you a briefing, assign you to a gorilla family to visit, and provide you with rangers to guide you. The treks take place on the slopes of the Virunga Volcanoes, and clients should be in good physical shape because some of the treks are physically demanding. Treks typically begin in the cultivated land at the base of the volcanoes and then ascend into the beautiful dense misty forests. The trek typically takes between 2 and 5 hours, depending on the location of the gorilla family, with a maximum of eight visitors permitted per gorilla family.

When you arrive at the gorillas, you have an hour to observe them. In Rwanda, the minimum age for gorilla trekking is 15 years. A maximum of 80 gorilla permits are issued per day, and during peak season, these sell out quickly; therefore, it is critical to book gorilla permits as soon as possible. Currently, gorilla permits cost USD$ 1500 per person per trek.

If you are interested in planning a gorillas in rwanda trekking safari, please contact us and we will be happy to answer any questions you may have, advise you on current gorilla permit availability, and assist you in planning your safari.

Here are the Groups of Gorillas in Rwanda

The various Groups of  gorilla in Rwanda  and their locations will undoubtedly change over time. Mountain gorillas frequently climb higher in the dry season and descend during the rainy season; they may move due to pressure from wild gorillas, and individuals frequently join other groups.

When tracking gorillas, you can ask to visit a specific group once you arrive at the park headquarters, but this is never guaranteed. Some of the families currently habituated for gorilla safaris in Volcanoes National Park are as follows:

The Susa Group, also known as the Kurira Group and first studied by Dian Fossey, is the largest, with 38 individuals, including three silverbacks. It can be a difficult trek to reach the Susa Group high up on Mount Karisimbi in the summer months, but it is well worth the effort because of their number and, uniquely, because it has a set of twins, a very rare occurrence in the world of gorillas.

The Sabyinyo Group consists of approximately 17 individuals, including two silverback gorillas, one of which, Guhonda, is the park’s largest. The group is usually found near the forest’s edge (about 20–40 minutes’ walk), between Sabyinyo and Gahinga.

The Agashya Group, formerly known as Group Thirteen, was renamed after the dominant silverback Agashya defeated Nyakairima in 2010. The Sabyinyo Group usually lives nearby, but they can travel far and high. It has about 22 gorillas.

The Amahoro Group, with 19 members under the calm leadership of Ubumwe, and the Umubano Group, with 13 members, usually live between the Karisoke and Bisoke peaks. Both are typically further away from the headquarters than the Sabyinyo and Agasha groups, but more accessible than the Susa Group.

The Kwitonda Group has approximately 23 members and was established in the DRC. The group is known to have a much wider range than others, having crossed the border into Rwanda in 2005. It was named after their dominant silverback, Kwitonda, who died in 2012, and is now led by silverback Akarevuro.

The Hirwa Group, which means “lucky,” is made up of about 18 gorillas who came from the Agashya and Sabyinyo groups. One silverback and one of only a few surviving pairs of mountain gorilla twins, Isango Gakuru and Isango Gato, are part of the group.

Rules to Observe while Visiting Gorillas in Rwanda

Mountain gorillas in Rwanda share 98 percent of our DNA and are thus very susceptible to catching human infections, particularly respiratory ones, but they lack our immune system to deal with them – even a common cold can be fatal. As a result, various rules for gorilla trekking have been put in place to help protect these endangered primates:

The opportunity to photograph mountain gorillas in their natural habitat can be magical, but it does come with some challenges, not the least of which is that the light can be poor and flash photography is not permitted.

That said, this isn’t the place for a massive, tripod-mounted lens; instead, work with something that can be hand-held or stabilized with a monopod. We discovered that a zoom lens (80–200mm f2.8) combined with a high ISO setting works very well.

Keep in mind that the rainforest will almost certainly be damp, and you may need to protect your camera from heavy rain.

Cost of seeing Gorillas in Rwanda, Uganda and DR congo

Gorilla conservation needs substantial funds for investments in research, Rangers, and scientists. This will cost money. A portion of the proceeds from gorilla permits are used to fund activities aimed at protecting these magnificent primates. In general, 15% of the money collected from gorilla permits is given to the government, 10% to local communities, and 75% to gorilla conservation. It is also important to note that if gorilla permits were significantly reduced, too many tourists would visit the primates, negatively impacting the overall well-being of the few habituated gorilla groups.

Mountain Gorilla trekking is only possible in Uganda, Rwanda, and the Democratic Republic of the Congo. Mountain gorillas can be tracked in Uganda’s Mgahinga and Bwindi National Parks. The primates can be found in Virunga National Park in Congo, and Volcanoes National Park in Rwanda.

Cost of permits Gorillas in Rwanda, Uganda and DR congo

A gorilla permit is required for gorilla tracking. You will not be permitted to participate in the activity unless you show the park authorities your permit. What exactly is included in the cost of a Gorilla Permit? A gorilla permit includes one hour of gorilla interaction, as well as park entrance and Ranger fees.

When is the best time for Visiting gorillas in Rwanda?

“Rwanda safari trips are available at any time, with the best time based on your personal interests and tolerance for rainy conditions.” The majority of visitors to Rwanda come for gorilla trekking, which is available all year. However, the wet climate in the Virunga Mountains, gorillas’ home, can make trekking difficult – especially during the Wet season (March, April, October and November).

The driest months (June to August) are ideal for Rwandan gorilla trekking, and they are also ideal for hiking in Nyungwe Forest National Park. Most primates in Nyungwe can be found all year, but chimps are easier to track during the Wet because they tend to move deeper into the forest when food becomes scarce.

Having said that, if you have good weatherproof gear and don’t mind getting caught in the rain on occasion, the Wet season months have advantages in that they are less crowded and lodges frequently offer lower rates. In addition, gorilla permits are easier to obtain during the Wet season.”

Why visit Rwanda Gorillas, what are the major attractions?

“Rwanda is a lovely little country best known for the 1994 genocide.” The good news is that the country has mostly recovered from this calamitous event and is now extremely safe and fully prepared for tourism. Throughout this turbulent time, Rwandan authorities managed to keep their gorillas safe, and seeing these gentle giants has become one of Africa’s top attractions. So, trekking mountain gorillas is by far the most popular attraction in Rwanda, and most tourists will come for that reason alone, often combining a visit to Rwanda with a safari in Kenya or Tanzania.

There is, however, much more to see and do in Rwanda than gorilla trekking. Other activities include golden monkey treks and climbing one of the Virungas’ volcanoes. Nyungwe Forest National Park is also worth a visit. This stunning high-altitude forest is surprisingly accessible and home to 13 primate species, including chimps.

Rwanda Gorillas prices to see them

“Trekking mountain gorillas is not cheap. Rwanda doubled its gorilla trekking permit prices in 2017, bringing the current price to US$1500. The high fee is justified by the fact that there are only eight habituated groups of gorillas that tourists can visit in Volcanoes National Park, and each group can only be visited by a maximum of eight tourists per day. As a result, there is a daily limit of 64 permits. Is it worthwhile? If you can afford it, it is well worth the money. “How can you put a price on such an incredible experience, which many who have done it describe as a travel highlight of their lives?”

Is trekking Gorillas in Rwanda Safe?

Yes, trekking gorilla in Rwanda and Uganda is safe for both you and this magnificent animal, as long as certain precautions are taken. With male silverbacks weighing up to 400 pounds and standing almost 6ft tall, it’s natural to feel threatened when encountering gorillas in the wild. But, in reality, these charismatic animals are peaceful – their gentle nature allows us to observe them up close in their natural habitat (though, as always, it’s important to remember they’re wild animals and their privacy should be respected).

They are also threatened with extinction. The destruction of their habits for agriculture, combined with widespread poaching, has reduced their population to less than 1000 mountain gorillas in the wild. 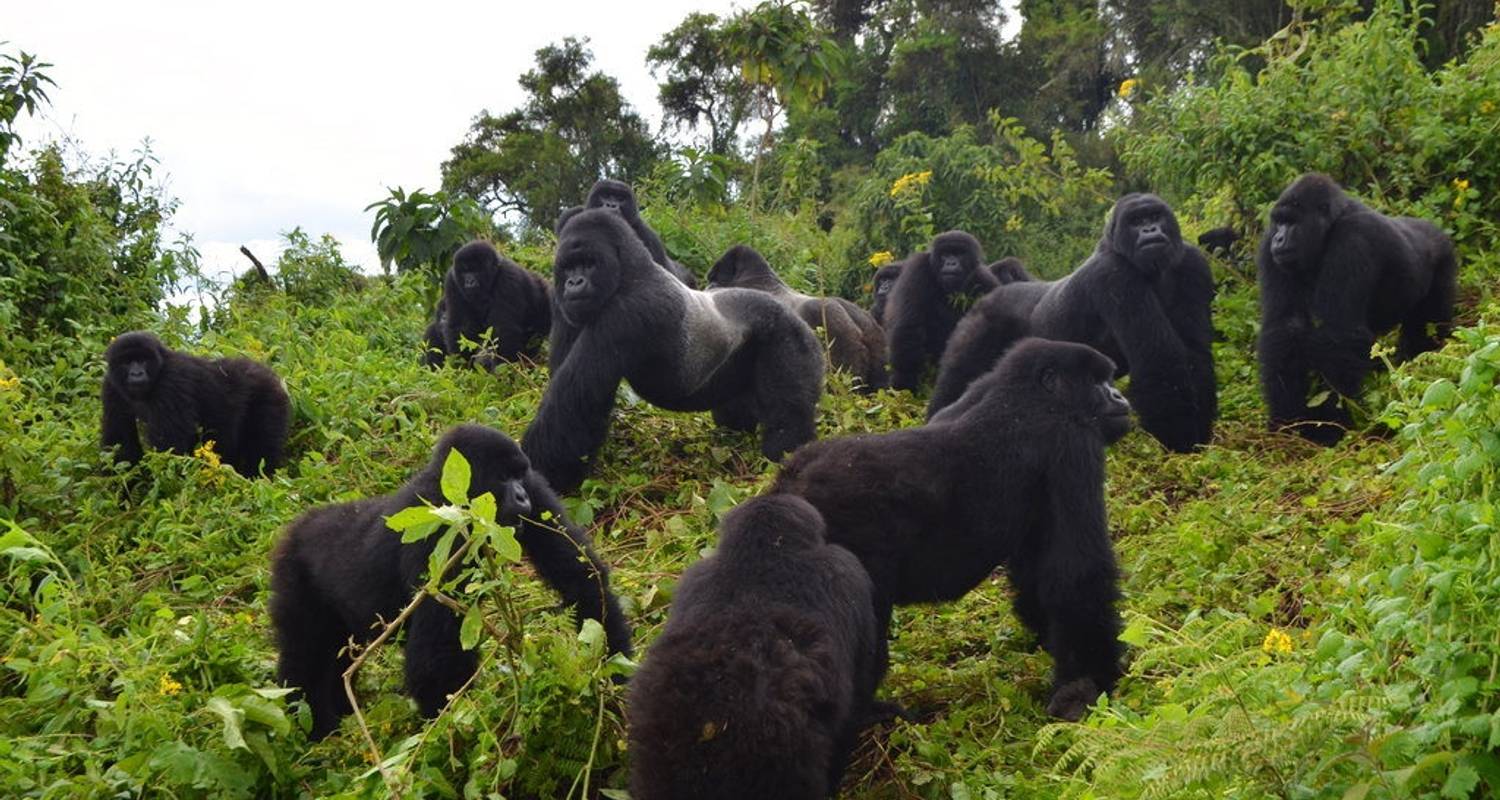