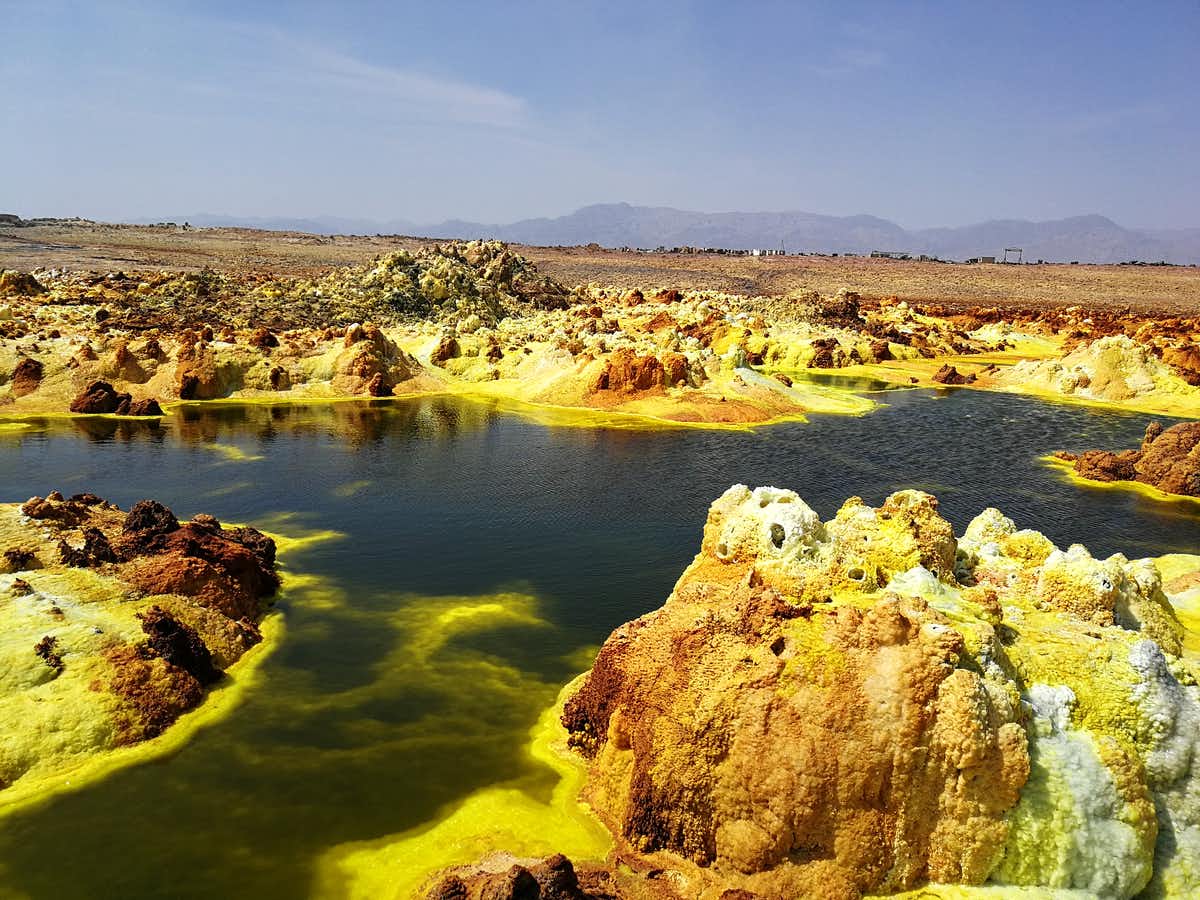 Erta Ale and Danakil Depression-Ethiopia’s Danakil Depression is one of the hottest, driest and lowest places on the planet. The area is located in the Afar Region of north-east Ethiopia near the border with Eritrea.

The Danakil Depression is the northern part of the Afar Triangle, a geological depression caused by the Afar Triple Junction: a place where three tectonic plates join.

Walking around the area you feel like you are on another planet. There are volcanoes with bubbling lava lakes, multi-coloured hydrothermal fields, and great salt pans that dazzle the eyes.

One of the main attractions located in the Danakil Depression is the Erta Ale Volcano. The name means “smoking mountain” in the local Afar language, and it is an apt name for the most active volcano in Ethiopia.

Erta Ale is one of the few volcanoes on the world that have an almost persistent lava lake. It is an isolated basaltic shield volcano, 50 km wide, rising more than 600 m from below sea level in the barren Danakil depression.
The volcano contains a 0.7 x 1.6 km elliptical summit crater with several steep-sided pit craters, one of them containing a lava lake. Another larger 1.8 x 3.1 km wide depression, elongated parallel to the trend of the Erta Ale range is located to the SE of the summit and is bounded by curvilinear fault scarps on the SE side. Fresh-looking basaltic lava flows from these fissures have poured into the caldera and locally overflowed its rim. The summit caldera is renowned for one, or sometimes two long-term lava lakes that have been active since at least 1967, or possibly since 1906. Recent fissure eruptions have occurred on the northern flank of Erta Ale.

While we endeavor to select the best comfortable accommodation for a trip here, comfortable accommodation is hard to come by in the Danakil Depression. Traveling in this harsh environment is more expedition than holiday with temperatures exceeding 45 degrees and few facilities other than your hut and sleeping cot or mat. If you are up for the challenge the scenery and experience in this Erta Ale and Danakil Depression is lifetime experience.