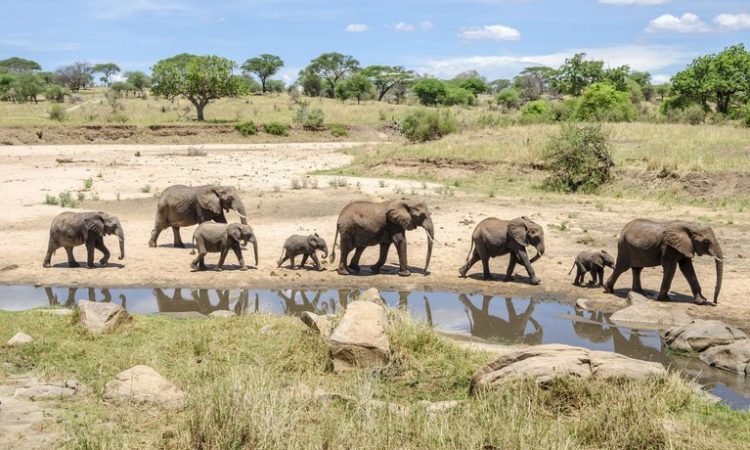 Tarangire National park is located in Northern Tanzania and was gazette as a protected area in 1970. It is most famous for its elephant migration, birding and authentic safari atmosphere.  The majority of travellers to the region either miss out Tarangire altogether or venture into the park for a matter of hours – leaving swathes of Tarangire virtually untouched!

Tarangire National Park is also  characterized by huge Baobab trees, hundreds of elephants home to about 2,500 individuals, the Tarangire river and many colorful bird species as more than 550 different bird-species are present). The safaris will take place both around the lifeline, the Tarangire River, and the drier hilly area. During the dry season (July-October) thousands of animals concentrate in Tarangire National Park from the surrounding wet-season dispersal and calving areas. Elephants gathering at the Tarangire River to drink make for a perfect panoramic picture! You can also spot many different animals like leopard, zebra, impala, warthog, eland, buffalo, waterbuck and lion.

During the dry months the concentration of animals around the Tarangire river is almost as diverse and reliable as in the Ngorongoro Crater.  However, the ecosystem here is balanced by a localised migration pattern that is followed by the majority of game that resides in and around the park. As a result, Tarangire is superb in season but questionable the rest of the year.  Elephants are the main attraction, with up to 3,000 in the park during the peak months.  Peak season also sees good numbers of wildebeest and zebra as well as giraffe, buffalo, Thompson’s gazelle, greater and lesser kudu, eland, leopard and cheetah.  The real prizes in the park are dwarf mongoose, oryx and generuk – but viewings are very rare. Tarangire is one of Tanzania’s finest birding destinations.

Tarangire safaris are the main activity, however, staying outside the park makes walking and night safari a possibility.  There are no boat safaris on the rivers here but Oliver’s Camp offers adventurous fly camping trips and very good walking safaris.  Both Oliver’s Camp and Swala have recently started night safaris within the park itself.  Ask us for more information as the regulations here seem to change every year!

How about the Night Game Drives?

Night drives are allowed in Tarangire. Some lodges don’t offer it though due to not having set it up with TANAPA. Also, if your particular lodge is outside the National Park then it will not offer night drives. It is worth checking whether the lodge you are looking at offers it or not before booking if this is something on your hitlist!

Tarangire – When to go

The game viewing from July though to October is exceptional but for the remainder of the year the majority of game migrates out of the park, onto the floor of the Rift Valley and to the grazing grounds of the Masai steppe.  As a result, we would advise visitors not to expect high concentrations of game in the off season months, but would still recommend travelling here to those who want to avoid the crowds.