The Last Remains of an Ancient Empire 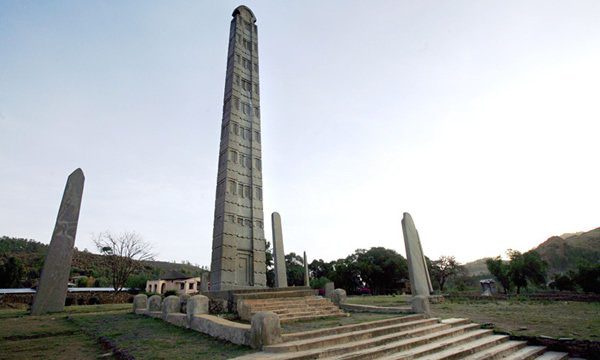 Axum (also spelled Aksum) in Ethiopia is possibly the greatest historical site that you’ve never heard of. The town was once the center of a great ancient civilization. Notable for its huge and iconic obelisks, it is rumored to have been the home of the Queen of Sheba and is believed by some to house the Ark of the Covenant.

The small town of Axum in the Tigray region is seen as the holiest city in Ethiopia and is home to the Church of Our Lady Mary of Zion, which according to Ethiopia’s Orthodox Church is where the Ark of the Covenant came to rest. In addition to this place of pilgrimage, the main attraction is what was the main city of the Axum empire.

Axum dates back to the 1st century AD and saw its heyday in the 4th-7th centuries. The empire collapsed with the rise of Islam, as Muslim merchants closed off the Axum Empire trading routes across the Red Sea.

Axum is one of the most popular tourist attractions in Ethiopia, its highlights include:

But perhaps what Axum is best known for is the iconic obelisks known as steles. Some of these are up to 23 meters tall. They have come to be seen as a symbol of Ethiopia itself. The tallest of the obelisks was taken to Italy, and Ethiopia had long petitioned for its return. This was finally granted a few years ago and the return of the stele was greeted with much celebration.

When to Go to Axum and How to Get There

If you are thinking of visiting Axum then you may want to avoid Ethiopia’s rainy season, which is between May and September. It will also be chilly as Axum is 2,000 meters above sea level and is only warm when the sun is out.

During the rest of the year, the sun is strong and the temperatures are high. For this reason, visitors should apply plenty of sunscreen and be sure to bring enough water.

If you look at a map of Axum you can see that it is in the north of the country, close to the recently reopened Ethiopia/Eritrea border. The town is a 20-minute flight from Gondar and a 1-hour flight from Addis Ababa. Internal flights within Ethiopia are both frequent and cheap. It is also possible to travel from Gondar to Axum by bus, changing at the town of Shire. This is a long journey that will probably require that you overnight in Shire. The nearest major town to Axum is Mekele, which is about 4 hours away by bus.

If you are traveling to Ethiopia and are interested in ancient history then Axum should be at the top of your list of places to visit.