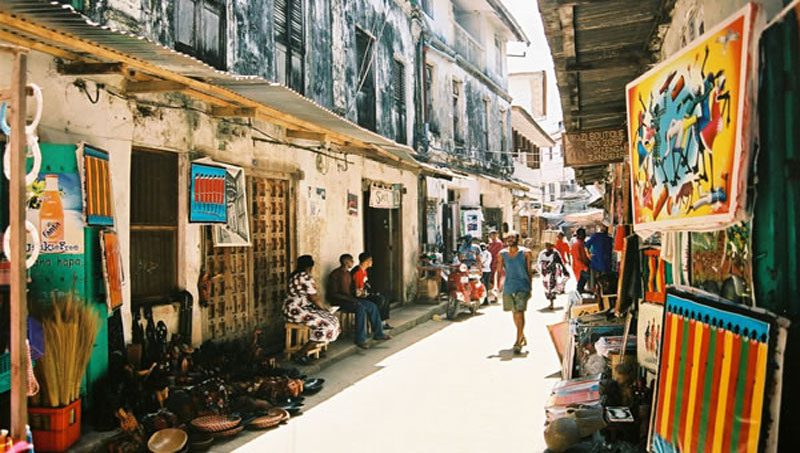 Located in the Old Quarter of the main town, Zanzibar, “Stone Town” (as it is often called) is certainly an interesting place to spend a few hours. Made up of a myriad of winding streets and alleyways, the region was declared a UNESCO world heritage site in 2000 for its remaining Arab and colonial architecture.

Stone Town is as old as the first told stories of its Island. The first Arab sea traders are said to have mentioned the ‘Coast of the black people’ – the land of Zenj – from which the name Zanzibar is believed to have come from. The Island’s strategic and accessible location along the East African coast turned it into cosmopolitan centre where Arab, Indians, Europeans and African traditions and cultures all got merged together.

The first settlement and the oldest today known in Stone Town is the Portuguese fort. Its foundation was laid down in the early 18th century, but probably not finalized until late 1780, by the Omani rulers, thus more correctly being a Omani fort. The most significant part of the Stone Town is made up of the dominant Arab houses. These buildings, often square and with a spacious inner courtyard allowing light and air to circulate in the house, were built closely together not considering the need of any fencing and/or garden around them. The Arab families were used to stay close to each other and many of the buildings were connected via walkways, like bridges, still seen on the first floors This arrangement made it possible for the female members of the family to go and visit relatives and friends without having to enter the streets. By just leaving room for narrow streets in between the often tall houses helped to make sure there would be a shadow for those walking in the streets. Still the wind from the sea was allowed to blow though and give some comfort during hot days.

Accommodations: Where to stay in stone town