Uganda has been discovered by few tourists so far & it’s still untouched and authentic full of many surprises like rolling hills, sparkling crater lakes, abundant wildlife, adrenaline activities on the mighty river Nile and, of course, the endangered Mountain Gorillas earning the name Pearl of Africa. Uganda is still authentically African, lush green and home to the friendliest people on the continent. We at Laba Africa Expeditions in love with Uganda and it is our privilege to introduce you to the Pearl of Africa. 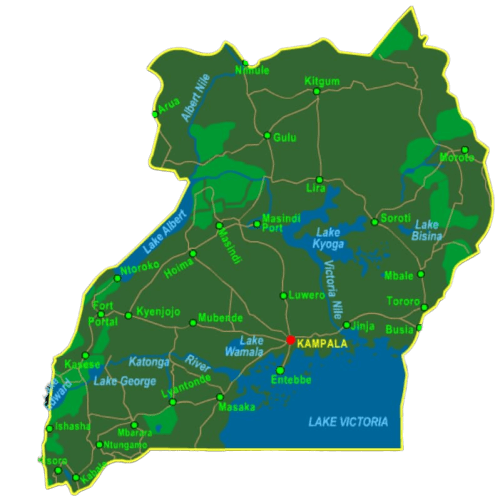 Overview Have you dreamt of meeting face to face with Gorillas of Bwindi and relax after the trip? This 4 […]
0

10 Days
10 Day Uganda Wildlife and Cultural safari-The Eastern and Northern parts of Uganda is brimming with adventure, from waterfall hikes […]
0

8 Days
8 Days Uganda Safari. Day 1: Welcome to Uganda! Arriving to a new and country can be over-whelming as you […]
0

Uganda is an East African country located on the northern shore of Lake Victoria, the largest lake in Africa. The name of the country is derived from the historical kingdom of Buganda. Due to its relatively central location, Uganda borders on several countries: South Sudan in the north, Kenya in the east and southeast, Tanzania and Rwanda in the south, and the Democratic Republic of the Congo in the west. Uganda is famous for the mountain gorillas, which were researched here by researcher Dian Fossey. An encounter with them remains unforgettable. But the classic Big Five can also be found in Uganda, which can therefore offer interesting alternatives to the national parks in Tanzania, especially in the high season in July / August. The Ruwenzori Mountains, also called “Moon Mountains”, are located on the border with the Congo. The third highest mountain range in Africa,

At 241,040 km² Uganda is about the same size as the United Kingdom and extends between 1 ° south and 4 ° north latitude and between 29 ° and 35 ° east longitude. The capital Kampala is almost exactly on the equator. One eighth of the country’s territory is made up of lakes and rivers, which, in addition to savannas and tropical forest landscapes, shape the image of Uganda. The Ruwenzori Mountains on the border with the Congo are part of the Central African Rift System. In the area of ​​Lake Edward, the mountain slopes drop very steeply, sometimes up to 800 meters. Most of the country, however, has gently undulating hilly landscapes or plateaus criss-crossed with hollows, in which extensive swamp landscapes such as Lake Kyoga are often formed. Northern Uganda is relatively dry and not very fertile, which is why this area is relatively sparsely populated. On the border with Kenya, there are still a few volcanoes, including the 4,321 meter high Mount Elgon. Due to the fertile soil and the good water supply, a large biodiversity was created in Uganda. The animal population is particularly diverse in the tropical mountain forests, but also in the swamp areas, which are particularly interesting for bird lovers.

With its location on the equator, Uganda has warm temperatures between 25 ° C and 30 ° C all year round. At night the temperatures cool down to a pleasant 12 ° C to 18 ° C. This moderated climate is mainly due to the altitude, since a large part of the country is above 1,000 meters. Seasonal temperature fluctuations hardly ever occur. The year is rather divided into rainy and dry seasons. The main rainy season runs from March to June, the second, much weaker, from October to December. Rainy season in Uganda does not mean that it rains continuously. Since precipitation often occurs in showers, there are almost as many hours of sunshine as in the dry season, which is also not completely dry. Due to the constant warm climate and good rainfall, people in Uganda are able to do agriculture all year round. Visitors are presented with a bright green every year.

About 34.5 million people live in Uganda. It is one of the most densely populated countries in Africa. Uganda is home to around 40 different ethnic groups, which are divided into two large groups: the Bantu-speaking peoples and the so-called Nilosaharan peoples. The most important Bantu peoples are the Baganda, which make up about a sixth of all residents, and the Ankole and Basoga, each of whom make up a tenth of all Ugandans. Among the Nilosaharan peoples, the Langi and the Acholi play an important role. Although each people has its own language, which is mainly used in the local area, the official languages ​​are English and Swahili. Since Swahili in Uganda is mainly spoken in the military and police environment and has a negative connotation,

Most Ugandans, about 80%, are either Catholic or Anglican Christians. Almost a tenth are committed to Sunni Islam. Traditional religions are still represented, but not very common. There is also a small African-Jewish community.
After independence in 1962, dictatorships of Milton Obote and Idi Amin followed for 25 years. Both terrorized the Ugandan population with military force and had thousands of political opponents executed. The first parliament was elected in 1989. President Museveni, who has been in office since then, continues to rule relatively authoritarian, but is pursuing a gradual democratization of the country. The political situation has remained largely stable despite temporary conflicts in nearby countries.

The road quality in Uganda is relatively well developed for African conditions. Especially in the area of ​​the capital and the connections to Kenya and Tanzania. However, the quality of the roads decreases significantly towards the north and west. Nevertheless, you can easily travel to Uganda even in the rainy season. Cellular and Internet connections are available everywhere, although the speed of the Internet connections does not meet European standards. We recommend using local cellular services.

Generally speaking, Uganda is a safe travel destination. Nevertheless, armed conflicts and raids occasionally occur near the border with the Democratic Republic of the Congo and South Sudan. Here you should travel with increased caution. A visit to the national parks near the border is still possible. The outskirts of larger cities should only be visited during the day. There is a greater risk of robbery here at night. Although the last terrorist attack occurred a few years ago, there is at least a potential danger. So avoid large crowds. For a personal assessment of the security situation, you should consult the current security information from the Federal Foreign Office.

Furthermore, the use of motorcycle taxis is not recommended due to the increased risk of accidents. Since Uganda is a country with a high income and social gap, we recommend that you only carry valuables with you unobtrusively to minimize the risk of theft. We would be happy to advise you in detail on this topic.