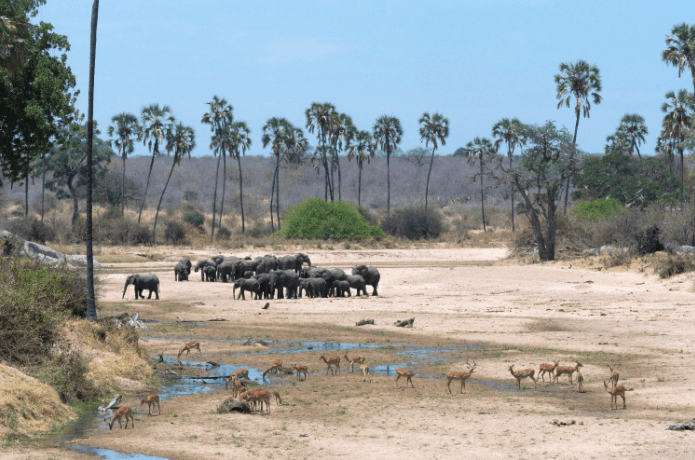 Ruaha National Park is now Tanzania’s largest national park and offers excellent wildlife viewing. It is particularly good for spotting predators, including very large prides of lion and the endangered wild dog. Elephants and a big variety of antelope species are another big draw to the park. It also has outstanding wilderness appeal, with limited exclusive, luxury camps available.

One of the park’s key attractions are the wild dogs. There are only a handful of places where these charismatic pack animals are easily observed, and this is one of the best. Ruaha is also home to the largest population of greater kudu in East Africa. Other rare antelope species that can be seen here include lesser kudu, roan and sable antelope.

The middle and end of the Dry season (from June to October) is the best time for wildlife viewing in the park. Wildlife is easier to spot because vegetation is thinner and animals gather around predictable water sources. The male greater kudu is most visible in June, the breeding season. The best time to see wild dog is during their denning season, from June to August.

The main feature of the park is the Great Ruaha River, which attracts loads of animals in the Dry season. The dominant vegetation is brachystegia (miombo) woodland, and some areas are dotted with the impressive baobab tree.

All year-round road access through Iringa from Dar es Salaam (about 10 hours) via Mikumi or from Arusha via Dodoma.

Day walks or hiking safaris through the untouched bush. Stone age ruins at Isimila, near Iringa, 120 km (75 miles) away, one of Africa’s most important historical sites.

Accomodation: Where to stay at Ruaha National Park