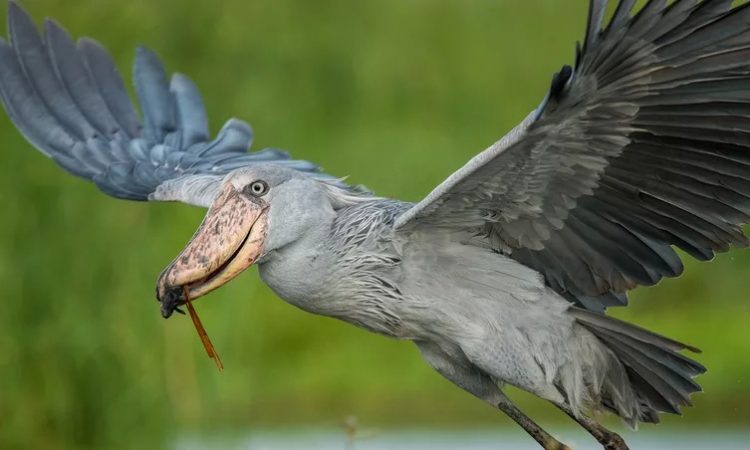 Located in a remote corner of southwestern Uganda, Semliki National Park protects an eastern extension of the vast Ituri Forest and forms part of a forest continuum that stretches across the Democratic Republic Of Congo to the Zaire River. Being a relatively stable forest “refugium” during the climatic upheavals of the Pleistocene, this is one of the richest areas for forest birds in Africa. A large number of predominantly Central African species reach the eastern limit of their distribution here and cannot be found anywhere else in East Africa. These include some of the continent’s most spectacular and sought-after birds such as; Congo Serpent Eagle, Long-tailed Hawk, Nkulengu Rail, Black-wattled Hornbill and Lyre-tailed Honey guide . Although it lies a bumpy three hours’ drive from Fort Portal, birders who take Uganda safaris , Semliki National Park will be richly rewarded with some of the very best forest birding in Uganda.

The area around the geothermal hot springs at Sempaya is not only very scenic but also offers some great birding. The cliffs behind the ranger post are home to the crepuscular Freckled Nightjar and these can be seen gliding around the clearing with Black-shouldered Nightjars. In the lush rainforest around here listen for the bizarre dawn and dusk duetting of the elusive Nkulengu Rail. Other nocturnal callers include Buff-spotted Flufftail and African Wood Owl. Around the cleaning and through other light gaps in the area, it is possible to glimpse African Goshawk, Red-thighed and Great Sparrows, Ayres Hawk-Eagle and Cassin’s Spinetail.

From the ranger post, head north (right) along the ” Boundary Trail ” . Crested Guinea fowl skulk in the undergrowth and the hollow hooting of the White-spotted Flufftail is commonly heard near forest creek in this area. Turn left where the trail forks and continue to the ” Female” Hot Springs with boiling hot water squirts and bubbles out of the ground.

OTHER WILDLIFE IN SEMLIKI NATIONAL PARK

53 species of mammal have been recorded from the park, many of which are shy, rare and nocturnal. Conspicuous species include Grey-cheeked Mangabey, Vervet, Red-tailed and Mona, Gentle (Blue) Monkeys, Olive Baboon and Guereza Colobus, De Brazza’s Monkeys are rare and Chimpanzees may seldom be heard than seen. While nocturnal primates include Pottos and Galagos. You are also lucky if you glimpse Elephant, Bush pig, Water Chevrotain, Buffalo, Sitatunga, White-bellied Duiker or Dwarf Antelope, Beecroft’s Anomalure or Zenker’s Flying Mouse. You are far more likely to spot the lively and agile squirrels such as Fire-footed Rope or Red-legged Sun Squirrel. Little collard fruit Bat and Target Rat. 30 species of butterflies have been identified, including 46 species of forest Swallowtails and Charaxes (75% of Uganda’s total) and at least 235 species of moths have been classified as restricted.
There are also 305 species of trees recorded, of which 125 species are restricted to this park alone.

There is an observation tower and boardwalk to view the geothermal hot springs at Sempaya. Otherwise, there is not much in the way of visitor facilities in the park and trail maintenance has been neglected for a couples of years; a machete ( ” panga” ) can be useful. Bring all your supplies and camping equipment if you plan on spending time in the forest. There are three new but abandoned and unfurnished shelters at Sempaya ranger post that could accommodate a few uncomplicated travellers. Fresh drinking water can be obtained from the creek 0.6 km from Sempaya towards Bundibugyo and a swim in the Mungilo Waterfall here is also highly recommended. It is definitely advisable to boil or purify the water from the oxbow lakes and the Kirumia River prior to consumption. Recommended campsites in the forest are at the first oxbow lake and at the second Kirumia River crossing, and outside the forest at the Sempaya ranger post. Some local produce and drinks can be bought at Ntandi. Porters can be hired at the village of Kirumia at a rate of $ 2-3 per person.