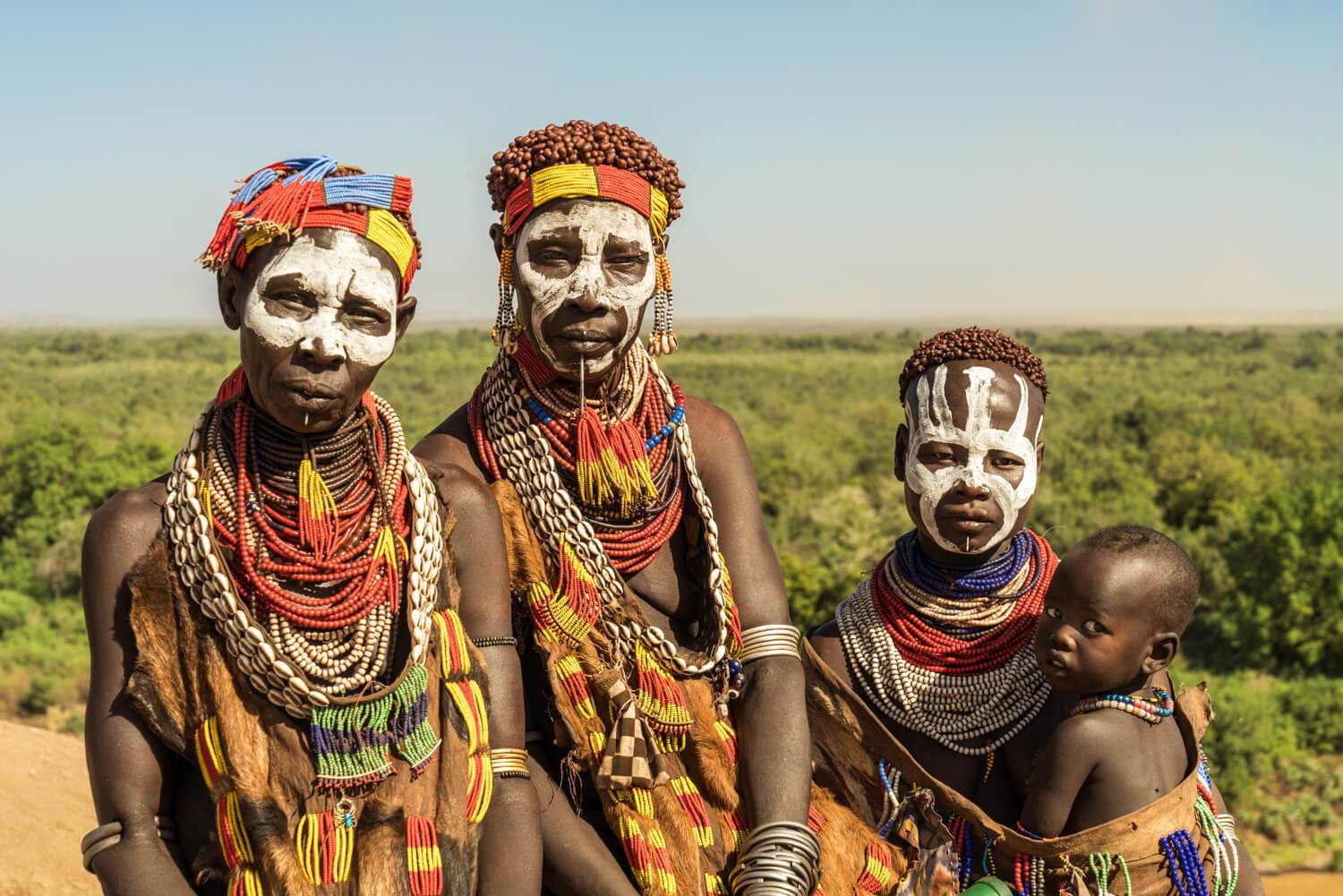 Tribes in Ethiopia-For centuries the indigenous tribes (roughly 200,000 peoples in total) lived lives completely cut off from modern society, surviving off the land according to age-old traditions and customs. In recent time, however, development and modernity has slowly found its way south and there is now a web of asphalted roads connecting previously isolated villages and warriors are increasingly trading in their spears for mobile phones.

Tribes in Ethiopia over view

For a while longer though, a trip to this southern region of Ethiopia will give a fascinating glimpse into the rich cultural heritage and tribal traditions of the peoples of Omo Valley, from ceremonial rites of passage like the Hamer’s bull jumping ceremony, to the Karo’s stunning body markings.

Inhabitants of Omo River’s eastern bank, the Karo tribe is the smallest ethnic group in the Omo Valley, with an estimated population of roughly 1,500-3,000.

Creative by nature the Karo are famous for their body and face painting skills. The paint is made from natural resources found in their surroundings like white chalk, charcoal or yellow mineral rock. The intricate designs were once only worn by men as a means to ward off evil spirits, but now the patterns adorn both male and female bodies and is a way to express beauty and reflect social significance.

The Karo tribe, like the Hamer, are practitioners of the Bula initiation rite, where young men leap over rows of cattle to signify the coming of age. A successful jump will mean that the man is ready for marriage. Unlike the Hamer however, the Karo regard this ceremony as a deeply private affair and will carry it out in secret and out of view from passing tourists and other tribes.

The 10,000 strong Mursi tribe lives in the southern part of the Omo Valley, near the border with Sudan. The Mursi women in particular attract much fascination due to their practice of inserting wood or clay plates into their lower lips. Traditionally, this signifies a rite of passage for women as they transition into adulthood. Today, however, some women opt out of this tradition.

The Mursi men are known to be fierce warriors. To impress the women with their display of courage and virility, the men take part in stick-fighting duels using two-meter-long poles called the donga. These fights will usually take place after the harvest in July and August. Tourists are now prohibited from spectating this ceremony of ritualized violence as their presence sometimes caused the tribesmen to fight more furiously, resulting in serious injury or even death.

The Arbore people are a small, pastoralist tribe in the south-western part of Omo Valley, near lake Chew Bahir. The main visible characteristic of the Arbore is their unique and colorful beadwork, which women lavishly adorn themselves with.

The Arbore primarily practice the Islamic faith, with a mix of pagan tradition. Men are allowed to take up to four wives, all of whom received a new name after marriage. The new wives are often named after the husband’s favorite cows.

The agriculturalist Aari people reside in the fertile hills surrounding the town of Jinka and bordering Mago National Park. They cultivate a variety of crops like wheat, barley, maize and coffee and the women are known for their pottery skills.

The Nyangatom tribe was once the most feared warriors in Omo Valley. Scarce water sources and grazing lands in the dry semi-desert lands where the Nyangatom tribe lives, were often the main reasons for conflict with neighboring tribes.

In peaceful times, the Nyangatom are semi-nomadic agro-pastoralists making a living cultivating crops like maize, sorghum and tobacco and raising their prized cattle. They are also famous among the tribes for their storytelling and singing skills.

The Dorze tribe lives up in the Guge highlands, overlooking beautiful views of Arba Minch and the Rift Valley lakes. Once a fierce warrior tribe, the Dorze are now farmers with a knack for cotton weaving. On terraced fields along the mountainside they grow their own food like highland cereal, vegetables, fruit and tobacco. The Dorze live in spectacular beehive shaped houses made from enset leaves. Some of these domed dwellings will measure up to 10 meters tall!

Predominantly residing in and around the town of Weyto, 50km from Jinka. They share a common language with the neighboring Hamer tribe. The banks of the Weyto River provide fertile lands to grow sorghum, millet and cotton and like many other tribes in the Omo Valley, they also herd livestock. The women traditionally wear attractive skirts made of leather while the men wear very short shorts and can be seen carrying a small wooden stool, which is a popular accessory in the region.

The friendly Hamer tribe live off the fertile lands of the Omo River cultivating sorghum, millet, vegetables, tobacco and cotton and rearing cattle and goats.

The people are known for their elaborate hairstyles fashioned with clay and adorned with feathers and other trinkets. The women wear coils of metal around their arms and layers of beaded necklaces. The necklaces worn by married and engaged women reflect the wealth of their husband.

Hamers are also known for their bull jumping ceremony which marks a rite of passage for young boys on their way to adulthood. The ceremony will start with female relatives dancing and being whipped by men who have already been initiated in the ceremony. Then, young Hamer men take gravity-defying leaps over rows of bulls.

The Borana are the largest ethnic group in Ethiopia and are mainly semi-nomadic pastoralists living on the border of Ethiopia and Kenya. Due to the harsh semi-desert environment, the Borana are often on the move in search of water sources and grazing land for their cattle. In the dry season the Borana must sometimes dig deep wells to find water. These are known as singing wells as the men will sing to keep the rhythm while transferring buckets of water out of the well and to the thirsty cattle.

The Borana follow their own governing system called the “Gadda”, which governs all political, economic, social and religious activities of the community. The elders will discuss community matters under a holy fig tree until a unanimous decision has been reached. To avoid disruption and make sure everyone gets a turn to speak, a talking-stick is passed around the group.

The Banna tribe lives east of the Omo River, in and around the Chari Mountains, and is closely related to the Hamer in both culture and language. The Banna, roughly 45,000 in number, are mainly cattle breeders but they are also known for their honey harvesting, which has become an important economic activity for the tribe.

A visible characteristic of the Banna men is the very elaborate hairstyles, involving a cap made of clay and adorned with feathers. The style takes a long time to prepare and once done it is carefully preserved by sleeping on special cushion-like stools. The women meanwhile wear beautiful beads in their hair.

Lucky visitors may witness the Banna practicing their ritual dancing and singing where they dress in long garments and paint their faces and bodies with chalk.