Rwenzori Mountain National Park is located within the “Mountains of the Moon”, as Mount Rwenzori is called. Mountain Rwenzori is situated in Western Uganda in the East African Rift Valley and straddles also to the Democratic Republic of Congo and its conservation area known as Virunga National Park. The mountain is the third highest in Africa rising up more than 16,700 feet above sea level and its highest peaks rise above the clouds and are permanently snow capped. 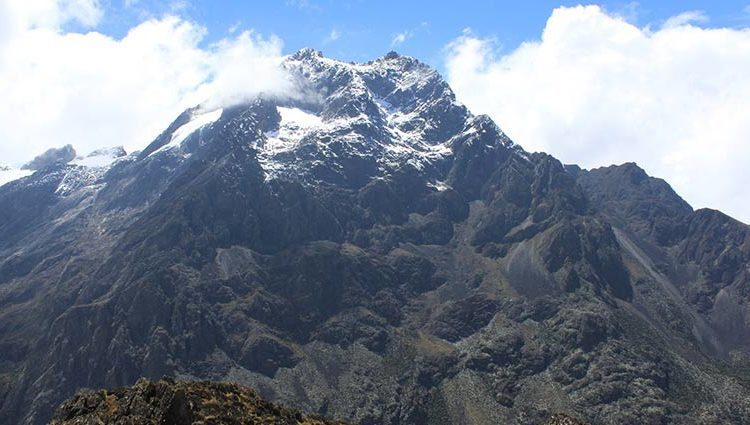 The Rwenzori Mountain ranges are higher compared to the Alps and they have glaciers which are one of the sources of the longest river on earth, the River Nile. Margherita Peak is the highest peak on the ranges making it the 3rd highest peak in Africa together with its twin peak, Mount Stanley, which is within the park. The 4th and 5th highest peaks, Mount Speke and Mount Baker, are also within the park. The mountain ranges were first brought to the worlds notice in CE 150 by Alexandrian geographical researcher and photographer, Pletomy, when he described a stunning mountain which he christened “mountain of the moon.” Later in 1899, English explorer, Henry Morton Stanley, was as spell bound as Pletomy when he beheld the ranges and christened them the “Cloud Mountains.”

The Rwenzori Mountain national park, which is the conservation area for the mountain, is a UNESCO World Heritage Site and covers almost 1000 sq. km and strides across the districts of Kabarole, Kasese and Bundibudyo. It includes most of the center and the eastern half of the mountain and is known for its beautiful plant life coupled with waterfalls, glaciers and a lot of other unique mountainous vegetation. The park has glaciers, snowfields, waterfalls and has been portrayed as one of the mainly attractive Alpine areas around the world.

How to get to the Mountain Rwenzori National Park.

The journey from Kampala to Kasese will take you about 5 hours and a half if you take the public means by bus. Most bus parks can be found in and around Kampala like Link Buses which takes that route. It could take you about that same time if you are traveling privately in your own car though a four wheel drive vehicle is advisable since western Uganda is mountainous.

However you can take only about an hour and a half if you used a plane. Contact your tour company to book a flight to Kasese. Your first stop will be Fort Portal from where you will travel south to Kasese. From Mubuku, it is 15 minutes in the north of Kasese; you can organize transport means after passing the Bugoye power plant to the gate. Porters, guides and other people to help you will be easily availed to you.

Things to do in Rwenzori Mountain National Park.

Follow the trails up to Lake Mahooma and Buraro chimp forest through the communities of Kichamba to the Karangura ridge; and to Bundibugo area through Bwamba pass. The communities of Ruboni and Turaco View also offer guided forest walks of various lengths just outside the park

The park provides opportunity for nature walks within the central circuit zone. These include trails up to Lake Mahooma and Buraro chimp forest; walks through the communities of Kichamba to reach the Karangura ridge; and hiking to Bundibugo area through Bwamba pass.

The communities of Ruboni and Turaco View also offer guided forest walks of various lengths just outside the park. Visitors can follow the River Mubuku, and glimpse views of Baker and Portal Peaks as they hike up to 2,300m above sea level. On a clear day it is even possible to view the snow capped Margherita Peak – a truly spectacular sight. Along the way, keep an eye out for chameleons, squirrels, vervet monkeys and many birds.

Bwamba Pass: Before a road was built in 1938 to link Fort Portal with the remote town of Bundibugyo, local people followed the most direct route between these settlements – a tough, 1,500m high trek over the steep north Rwenzori ridge, known as the Bwamba Pass. The Abanya Rwenzori community group leads visitors over the mountain through isolated mountain villages to visit the bamboo forest and enjoy superb rift valley views.

The Central Circuit Trail: This challenging, seven-day climb provides a circular tour of the high Rwenzori. From the trailhead at Mihunga, the route ascends the Bujuku Valley via Nyabitaba for acclimatization before reaching the peaks. Clients joining the Central Circuit after Bujuku will traverse the Scott Elliot and Freshfield passes to descend through the Mubuku Valley. Climbers can scale the snow peaks though many consider the exceptional scenery ample reward for their exertions.

Kilembe Trail: The recently reopened Kilembe Trail ascends the southern slopes of the Rwenzori from a trailhead at Kilembe near the town of Kasese. The route along the lovely Nyamwamba Valley passes glacial lakes and some stunning viewpoints before joining the Central Circuit at Lake Kitandara. The standard route scales Mount Baker though the scenery makes shorter treks rewarding enough.

The Rwenzori Mountains National Park offers opportunities for cultural experiences with one of the local tribes living at the foot of the mountains. Tourists can go and visit the village of Ruboni to learn about the daily lifestyle and history of the Bakonzo tribe. The Bakonzo people arrange cultural dance performances while sharing information about their history.

The other interesting cultural experience is to go for the Bulemba-Ihandiro Cultural Trail. This trail gives more exposure to the intriguing culture of the Bakonzo. There are opportunities to visit   a traditional healer and local blacksmiths. Visitors learn how to make fire locally and weave baskets. The Bulemba-Ihandiro Cultural Trail also takes visitors to the Bakonzo traditional Museum. The local museum has a collection of traditional items of cultural and historical importance to the Bakonzo (Rwenzururu) including art pieces and locally made dresses.

The Bakonzo gather and make an annual (2nd September) pilgrimage to remember their great King Isaiah Kibanzanga Mukirania. The king played an important role in protecting the Bakonzo people from oppression by their neighbors the Batooro. If one is visiting the Rwenzori area around September and is looking for a special African experience, then this is it. The day is filled with celebration, sacred rites and sacrifices in memory of the great king.

Before visiting the Rwenzori Mountains national park for any activity, it is important to note that the temperatures around the park are extremely cold even during the dry seasons. Avoid hiking during the rainy months between March – June and September – October. The Rwenzori area receives rain throughout the year but the amount intensifies during the wet season. The area can get very cold and the trails are slippery and full of mud. Other factors to take into consideration are:-